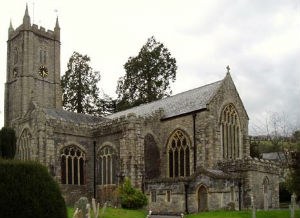 The Parish Church of Ashburton, dedicated to St. Andrew, is situated in West Street, just a short walk from the centre of the town. The earliest known records of the Church date back to the 12th Century when John the Chanter, Bishop of Exeter (1186-91) gave it to the Chapter of Exeter Cathedral

In the 14th century, Walter de Stapeldon, Bishop of Exeter (1307-26), Lord Treasurer of the Realm, a trusted servant of King Edward II, hearing of its dilapidated condition, formally visited the Church on April 3rd, 1314 and finding amongst other defects the North Aisle in ruins, ordered these to be remedied on pain of a heavy fine.
Rebuilt in the 15th century the Church has traces of 13th and 14th century remains incorporated in the building. A product of the 15th century mason, impressive in it's stately dignity, grandly proportioned and possessing a strong individuality, the tower rises 92 feet to it's embattled parapet. The tower contains one of the finest peals of eight bells in the district.
The transept fronts are especially worthy of attention. The beauty of line and proportion which so characterises this Church is apparent throughout.
The 18th century entrance gates are wrought-iron of exceptionally fine workmanship and design. They are surmounted by the arms of the Borough of Ashburton.
The interior has much of interest with a long wagon roof running the entire length of the church. The shaft of one of the dignified piers of the nave is made from a single piece of granite. There are some fine 15th century wooden roof bosses in the side aisles. In the 15th century the prosperity of Ashburton led to the chapel of St. Thomas a Becket, in the north transept, becoming the Guild Chapel of the wool workers and the chapel of St. Catherine, in the south transept, becoming that of the tinners.
Many changes took place in the 16th, 17th and 18th centuries but these were largely swept away in the Victorian era when a massive restoration programme, carried out by the architect W. G. Street, gave the Church it's present neo-Gothic character.
The Michelmore family, and others of late Victorian time, put in the stained glass windows. With their rich colours and strong Biblical themes they are a means of Christian teaching. Half an hour can easily be spent studying the message of these beautiful stained glass pictures.